When J. W. Robertson Scott settled in Idbury in 1923, it was a run-down, fairly unremarkable place. It was a village in decline – down from 113 residents in 1851 to just 41. One of the first things Scott did when he retired here was a write a book called The Dying Peasant. Yet within a decade the village was a thriving place, with 4 new council houses (later extended to 6) built on land acquired and donated by Scott, and a new sense of pride and purpose in village life, from the children who were chosen as ‘parish marshalls’ and charged with keeping the village tidy to the adults who suddenly found their knowledge valued and their opinions listened to. It was a remarkable transformation, and although Robertson Scott may seem now rather paternalistic in his attitude to the villagers, at the time his willingness to mix with them on equal terms was really extraordinary, and was I think the mainspring for the village’s revival.

This improvement of the village – the picturesque houses are in a very bad state, let’s find the land and the money to build some new ones – was a typical piece of practical philanthropy from Scott. It is interesting too that he made sure the cottages had plenty of garden to grow vegetables, or keep a pig; in fact village lore has it that he had to be restrained from making the very substantial gardens twice as big again.

The first four cottages were built by Chipping Norton District Council in 1926. Each cottage cost £460 to build. The rent inclusive of rates was fixed at 6s 6d per week. A government grant under the Wheatley Act encouraged local councils to build such properties; the grant was £12.10.0 per cottage, yearly for 40 years. The Council also contributed £4.10.00 per year from the rates.

The foundation stone for the new council houses was laid with great ceremony in 1926. All the pupils at Idbury School, including the infants, marched to the site from the school, with Miss Jones, the headmistress (in cloche hat at the front, holding a trowel), and Miss Soden, the assistant teacher. Miss Soden was the daughter of the village blacksmith. J. W. Robertson Scott is in the centre at the back. 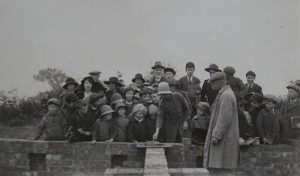 The foundation stone for the new council houses was laid with great ceremony in 1926. All the pupils at Idbury School, including the infants, marched to the site from the school, with Miss Jones, the headmistress (in cloche hat at the front, holding a trowel), and Miss Soden, the assistant teacher. Miss Soden was the daughter of the village blacksmith. J. W. Robertson Scott is in the centre at the back.

The foundation stones were laid by two Idbury children, Jackie Paxford in his Scout uniform, and Florrie Bond in her Girl Guide uniform. The speech Robertson Scott gave to the children at the laying of the foundation stones was recorded in the local paper, and gives a vivid flavour of Idbury in 1926:

All the children in the school, including the infants, marched to the site from the school, with Miss Jones (headmistress) and Miss Soden (assistant teacher) at their head. The proceedings began with a short explanatory address to the children in the school by Mr. Robertson-Scott. He said that, just as in some places boys were still playfully whipped in ‘beating the bounds’ of the parish, so that they should remember the boundary lines, the head boy and head girl of the school were being chosen that day to lay the foundation stones of the new cottages so that the whole of the school children should remember, when they grew up, how these cottages came into existence. The ceremony, which was for the children only, was also to remind them how, by means of educating themselves as well as they could and by using wisely the votes they would have when they became men and women, other good things could be got, not as gifts, but by their own exertions. The cottages had been obtained because people had held meetings and asked for them in the right way. The children had to work hard at their education so that they could not only get things for themselves, but give the world something. Mr. Green, who designed the cottages, and Mr. Parsloe, who was building them, would not be where they were if they had not worked hard. Mr Robertson-Scott showed the children a piece of crystalline limestone from a pocket which had been dug up on the site of one of the cottages. He pictured the time when the sea still covered nearly all the ground on which Idbury stands, and how a very little stream that, had there been human beings on the earth at the time, no one would have thought would have been equal to anything, had made the deposit which produced this beautiful white rock. Thus all of them, however humble and unrecognised they might be, could make their mark in the world.

The stone-layers did the laying of the stones, which have cut on them “1926,” in good style. Then all the children sang the prophetic “These things shall be” and “Till we have built Jerusalem,” and gave three cheers, on the call of Mr. Robertson-Scott, for the Surveyor, the builder, and the District Council.

There is some evidence that villagers transplanted from their old cottages to the new ones pined for their original homes, however insanitary and dilapidated they might have been. David Green’s fictionalised memoir of his time in Idbury, Country Neighbours, has quite a bit about a lady, a retired washerwoman and local midwife, whom he names Emma Bramley. He writes, ‘The cottage she lived in – a new, semi-detached nonentity run up by a benevolent council – she hated. She was for ever wishing herself back in the old thatched place which had been “modernized” for somebody else; though while she had lived in it she had called it her “hovel”.’

Scott bought the land for the new houses from the farmer F. W. P. Matthews, who lived at Fifield Manor. Matthews wrote to him on 21 October, 1926:

Dear Mr. Robertson Scott, Thank you very much for your cheque £12.10.0 for your subscription to what I think I may call ‘Scott’s Folly’, !!!!! I hope we may neither of us ever regret it. But I fear we shall.

I passed by the other day and thought the walls looked rather thin. It is an exposed place. I hope the wind won’t blow them down. And I hope the people who live in them will be able to get a living off the land.

The most profitable business nowadays is a motor garage. Perhaps one of the tenants there will set up some ugly thing of that sort to make money by.

But I must not be pessimistic. I must ‘wait and see’ and wish you all success.

This letter disguises the fact that F. W. P. Matthews was as much a philanthropist in this matter as J. W. Robertson Scott. Matthews valued the half acre of land at £25.00, and sold it to Scott for half its market value. This was probably one of two such deals, as a report of council discussions about fixing the rent and rates for the cottages quotes Robertson Scott as saying that it was reasonable for the local authority to contribute to the cost of the cottages, ‘in that private persons had helped to make the building of the four cottages possible by giving land to the value of £50.00. Each house is built on about a quarter of an acre of land.

The land is now worth rather more than £50.00 per acre, and the buildings are still standing. Matthews’ fear that ‘the cottages will be expensive and unsatisfactory’ proved unfounded. The wind has not blown them down, and they are still happily lived in today, in a mixture of private and council ownership.