Idbury is a small Cotswold village in West Oxfordshire,

roughly halfway between the towns of Burford and Stow-on-the-Wold. Idbury is situated high on a limestone ridge commanding the Evenlode and Wychwood valleys. Although tiny, with fewer than 40 houses, Idbury has a rich architectural, social, and literary history, and is today a thriving and happy village. Idbury is a Conservation Area, with many buildings dating from the sixteenth and seventeenth centuries.

Idbury has been a settlement for at least two and a half thousand years; the Iron Age hillfort of Idbury Camp, 500m west of the present village, is a scheduled national monument. It was created by the Dobunni, the early British people whose centre of power was at Cirencester. There is also evidence of Roman occupation.

The name Idbury is Saxon, meaning a fortified settlement of one hide of land (neighbouring Fifield, ‘five hides’, is still about five times bigger than Idbury). 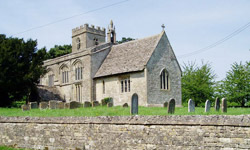 The oldest building in the village is the church of St. Nicholas, which was built in the twelfth century. Norman walls survive in the nave and the chancel, and the original Norman door with pie-crust decoration is now in the north wall. The church has some additions from the thirteenth century, a tower and north aisle of the fourteenth century, and a rare fifteenth century ‘squint’ linking the north aisle and the chancel. The interior was substantially modified in the nineteenth century. The most important interior feature of the church is the fifteenth-century stone font, a little masterpiece of decorative stone-carving. Only a few fragments of stained glass survived the Reformation, but the result is a church that is often flooded with light.

In the churchyard is the elaborate grave of the engineer Sir Benjamin Baker, the architect of the Forth Bridge and the Aswan Dam.

Idbury Manor was built in 1570, and many other 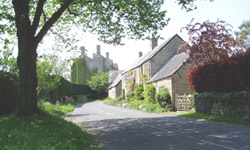 buildings in the village date from the sixteenth and seventeenth centuries. The church is listed Grade 1, and sixteen other structures are listed Grade 2, two farmhouses, several barns, the old forge, and the one remaining thatched cottage (another, dating from 1572, was demolished in the mid-20th century).

Idbury’s history was largely agricultural until the twentieth century. Nevertheless the village had a rich folk culture of dance, song, storytelling, traditional drama, and custom. The Idbury morris dance tradition was collected and published by Cecil Sharp, and has profoundly influenced the morris dance revival; one morris dance is called ‘Idbury Hill’.

In 1922 Idbury Manor was bought by the journalist and rural reformer J. W. Robertson Scott. In 1927 Robertson Scott founded The Countryman magazine, turning the upper rooms of the manor into editorial offices. A number of prominent writers worked in Idbury for The Countryman, including the Canadian poet Frank Prewett and the author Victor Bonham-Carter.

Visitors to Idbury in the 1920s included the authors E. M. Forster, May Sinclair, and E. V. Knox, the actress Edith Evans, the potter Bernard Leach, and the Japanese poet and folklorist Yanagita Kunio. In 1924 Sylvia Townsend Warner lived in the village in a cottage rented from Robertson Scott, completing her novel Lolly Willowes and writing a number of poems.

Robertson Scott also arranged fortnightly ‘Village Neighbours’ meetings in the schoolhouse, at which speakers such as George Bernard Shaw addressed the villagers on matters of note.

In the same spirit, the village has staged in 2005 and 2006 the first two in an ongoing series of Idbury Arts Festivals. Each event was followed by a community party. Speakers have included the author Philip Pullman, the psychologist Oliver James, the architectural writer Philip Wilkinson, and the Ducklington Morris (including our vicar Rev’d Wendy Callan) demonstrating the dances of the Idbury morris dance tradition.

Thanks to the Arts Festival, the church bells of St. Nicholas are now ringing again, for the first time since they were silenced in WWII. The inscription on the treble bell reads ‘Peace and Good Neighbourhood’. This is the motto of Idbury, now as in the past.

The current revival of community and church in Idbury is built on its tradition of intellectual curiosity, creativity, conviviality, and community spirit. Idbury is one of the most special small communities in Britain, and we aim to make it a beacon of openness, inclusiveness, and rural revival.