After the death of J. W. Robertson Scott, Idbury Manor was bought by Margaret C. Godley and Edith Wood, the co-principals of Look and Learn, a progressive girls’ finishing school. 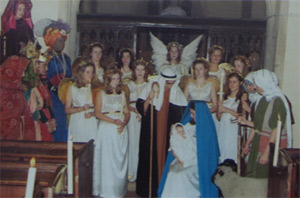 To call Look and Learn a finishing school is to misrepresent it. Apparently when it first opened in London it was called the School of Citizenship, and this names gives a much clearer indication of ethos of the school and the courses it offered.

A surviving brochure for Look and Learn says that it offers ‘An integrated course of study about the world of the Twentieth Century.

The course was devised to offer a post-school education for girls. The aim of the course is stated as ‘to teach girls to think for themselves and to give them sound background knowledge of their own country, the Commonwealth and other nations – in brief, to open doors for the young mind.’ 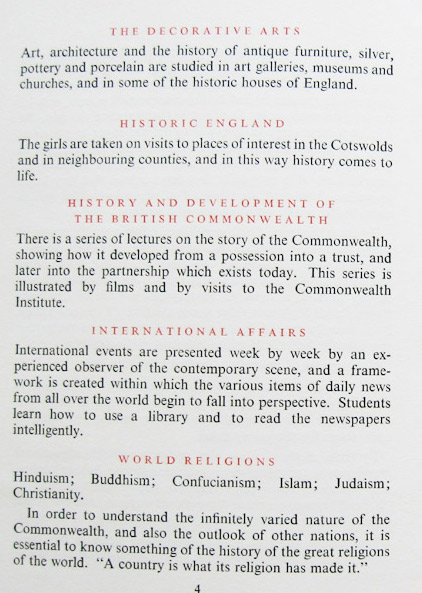 At a time when wealthy and well-connected families in Britain did not regard the education of girls as a priority, and certainly would not expect their daughters to go to university, this was a remarkably bold aim to admit to. The courses at Look and Learn were not about etiquette and deportment, but about ‘How Britain is Governed’, or ‘The Welfare State’, or ‘International Affairs’. One aspect of the course covered ‘the history of the great religions of the world’, covering Hinduism, Buddhism, Confucianism, Islam, Jainism, and Christianity. Many of these courses – and others teaching public speaking, French, Italian, appreciation of opera, and so on – were taught by distinguished visiting lecturers.

The year’s course consisted of three ten-week terms, after which ‘A diploma is awarded to students who attain a satisfactory standard’. The number of students was limited to twenty-two, who lodged in the Manor, the Forge, and the Thatched Cottage. Fees were £260 per term.

Miss Godley records in a note at the back of The Idbury Book that ‘Idbury gave the girls a warm welcome.’ Among the students was Charlie Chaplin’s daughter Geraldine, and Charlie is remembered locally as visiting in his Rolls Royce.

A highlight of the year was the annual Nativity Play staged by candlelight in St. Nicholas church. The last play, in 1973, featured live animals loaned by Miss Winifred Bailey of Foxcote.

The following year, 1974, saw the publication of The Idbury Cookbook, written by Edith Wood, and illustrated by her niece Anne Craig. In an introduction, Edith Wood explains that ‘with the house we inherited a wonderful cook – Mrs Wheeler. Born and bred in the hamlet of Idbury she was, as one of the villagers described her, “a willing woman”. No clock-watching for her! On her sudden death in mid-term I was confronted by 22 hungry young faces. So I plunged in at the deep end.’ 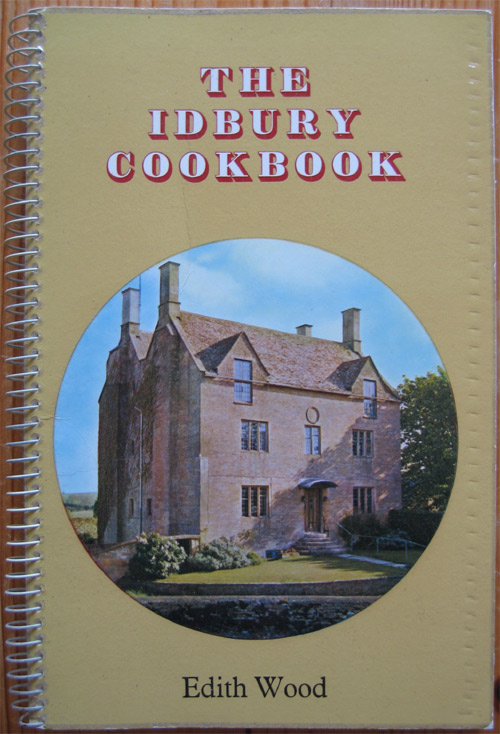 Her philosophy of cooking was simple:

To cook well one must love people. I quickly discovered that if the spirit were wrong in the kitchen, the result could be tasted at the table. There is a great truth for this tired old world in the giving of oneself in caring and hospitality. Nothing breaks down barriers more quickly than to feel wanted in someone’s home, where real trouble has been taken to prepare for the invited guest. 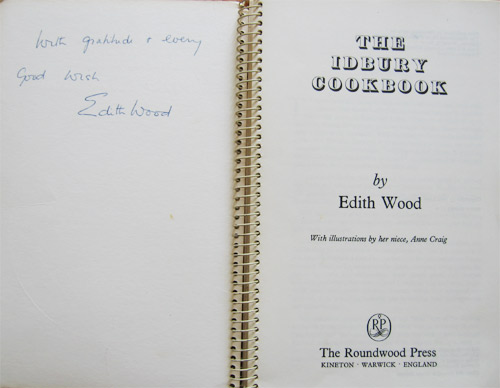 Several dishes are marked as ‘An Old Smithy Favourite’. These include Mrs Field’s Date Slices, Mrs Winter’s Gingerbread, and Zillah’s Cake. This is a reference to the shop that Edith Wood set up in the Old Smithy every Saturday during the spring and summer months, ‘where fresh vegetables, fruit, flowers, jams, jellies, chutneys, clotted cream and home baking are for sale’. She purchased the old smithy in 1970 especially for this purpose. 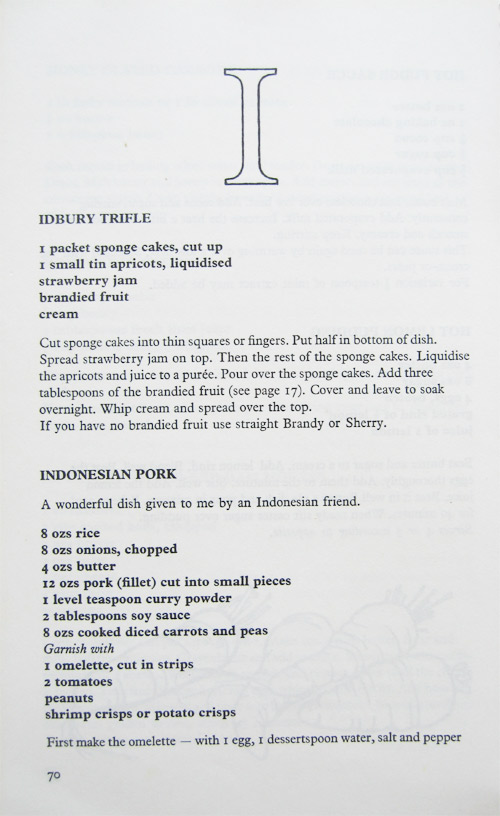 Margaret Godley writes that, ‘Her idea – supported by the County Council – was to give the opportunity to the inhabitants of Idbury to sell their produce at weekends. Idbury’s Old Smith became famous for the quality of vegetables & flowers, and its delicious home-made pies, meringues, cakes etc. Would-be buyers came from far afield.’ 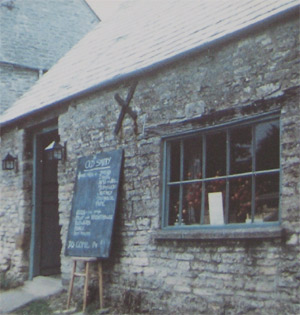 The Idbury Old Smithy must have been one of the very first Farm Shops in Britain. Edith Wood writes, ‘People come from far and near, and as a result this village has many friends and has become a real family.’ The shop is even mentioned in Edith Brill’s Life and Tradition in the Cotswolds (1973), in which she writes, ‘The smithy of Mr Soden at Idbury has been turned into a shop where the villagers sell their home-made bread, cakes, jams and surplus garden produce.’ 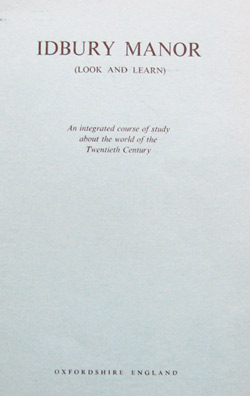 In Miss Godley and Miss Wood, then, Idbury had found two people of intellectual curiosity, generosity of spirit, and real humanity – fitting successors to John and Elspet Robertson Scott at Idbury Manor.

Sadly, after ‘twelve full and happy years’, in 1973 Edith Wood fell seriously ill. The Look and Learn courses closed in the spring of 1974. A much-folded scrap of typescript loosely inserted in The Idbury Book tells the rest of the story. The words are most probably Margaret Godley’s, possible written to read at Edith Wood’s funeral.

The death of Edith Wood, at the age of 56, on July 8th, 1975, after more than a year of intense suffering, has left a gap in the neighbourhood which cannot be filled. Even those who did not know her personally were aware of her many gifts and of the charm and grace of her unselfish personality. ‘To give and not to count the cost’ was the basis of her faith. 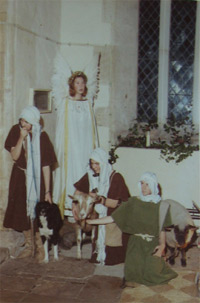 She loved people, and so it was that people loved her in return and came to her with their troubles. Her many ‘Look and Learn’ students at Idbury will miss her sadly. One of them writes: ‘All her friends and all of us will miss her dreadfully. She was such a human person, and a shining example of how near to real wisdom we human beings can get. Every lecture she gave was pure magic, and always opened up new fields of interest.’

A friend writes: ‘Even in my relatively brief acquaintance with Miss Wood it was borne in upon me that I had encountered a great and rare spirit, whom it was a privilege to know. In a real sense the whole of Idbury is a memorial to her; she devoted herself to preserving its special qualities of beauty and of peace. Now she has found the ultimate beauty and peace of which Idbury is an earthly reflection.